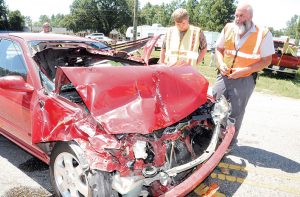 Firefighters look over a small car involved in a four-vehicle crash in Tabor City Friday. In the background is one of two pick-up trucks also involved. (Deuce Niven, TLT)

Several people were taken by ambulances to area hospitals, though none of the injured appeared life threatening, Maj. Greg Sibbett of the Tabor City Police Department said.

An investigation into the crash, which involved a small car, a small SUV, and two pick-up trucks, is underway, Sibbett said.

Detours were set up at Vinegar Hill Road on U.S. 701, and at Sidney-Cherry Grove Road to Ten Mile Road on NC 410.

That intersection has seen its share of wrecks in recent years, with a state Department of Transportation improvement project slated to begin this fall to improve the flow of southbound traffic off of NC 410 onto U.S. 701.