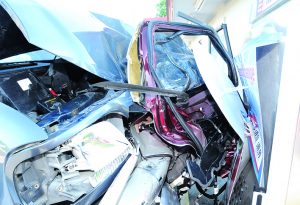 Crushed between an SUV and propane gas cage is the driver’s side back door of a Cadillac split in two in Monday morning’s crash north of Loris. (Deuce Niven, TLT)

One person was airlifted to a regional trauma center, some others were taken by ground ambulance to a hospital following an auto crash that left a Cadillac convertible broken in two, it’s trunk landing more than a dozen yards away after narrowly missing gas pumps at a convenience store north of Loris.

Witnesses said the drive of the Cadillac was able to walk away from the wreckage just off of the highway. Several people inside the SUV that careened towards the former Hot Spot convenience store, striking a parked car before coming to rest into the propane tank enclosure on the south side of the building, were evaluated by Horry County Fire Rescue crews, some taken to a hospital.

Paulette Moore said she was inside the store with her grandson, startled by the impact outside.

“I was just about to go back out,” Moore said.

Damage to the rear of her small car, which was spun more than 180 degrees, was significant. 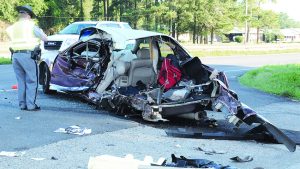 Their investigation was ongoing Monday morning.

Unusually, none of the wreckage came to rest on the highway, the biggest disruption to the flow of traffic coming from emergency vehicles.

Loris Fire Chief Jerry Hardee said that section of US 701 is dangerous, has seen man wrecks, but that he had never seen a crash with such significant damage with all of the vehicles off of the highway.

He said he ordered emergency vehicles off of the highway as quickly as possible.

“We’ll close down the highway when we have to,” Hardee said. “But not when we don’t.”