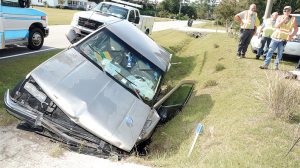 Steven Edward Rivenbark, 61, of Tabor City died after his pick-up truck went off the left side of the road, crashing into a ditch and striking a culvert in the 22000 block of Peacock Road in the Iron Hill area shortly before 5 p.m. Tuesday, Trooper Brett Baxley of the North Carolina Highway Patrol confirmed late Tuesday.

Witnesses said Rivenbark was barely breathing and pulled from the truck before emergency crews arrived. By then, Rivenbark had died.

There were no skid marks on the road leading to the crash site, Rivenbark traveling south on the two-lane roadway before the truck left the road, Baxley said.

An autopsy that could determine if some medical condition contributed to the wreck will take weeks, or longer, to complete, Baxley said.

Confirmation of Rivenbark’s death came from family members and a funeral home announcement.

Funeral arrangements had not been made late Tuesday, the Inman Ward Funeral Home announcement, and will be announced. The obituary will be posted at tabor-loris.com when it becomes available.