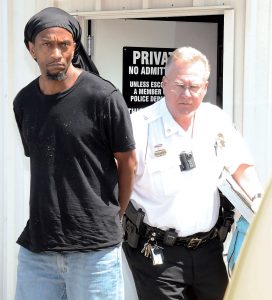 A man and women were arrested, her three small children placed with the Department of Social Services, after a tip thwarted a plan to toss cell phones and tobacco into Tabor Correctional Institution, Maj. Greg Sibbett of the Tabor City Police Department said.

Jamal Davis, 43, of Baltimore Road, Warrenton; and Romecia Milchelle Perry, 28, of Triple Lakes Road, Sanford, were each charged with two counts of furnishing phones to inmates, one of providing tobacco products to inmates, Sibbett said.

Davis was held at the Columbus County Detention Center under a $250,000 secured bond. Perry’s bond was set at $100,000. Social workers were making contact with a family member of Perry’s to take charge of the children, boys ages 4 and 7 months, and a 3-year-old girl. All were in the mini-van Perry was driving.

Sibbett said he and prison officials learned late Thursday of a plan to toss contraband into the prison, over a fence near a wooded area, and were lying in wait when Davis walked in Thursday morning. 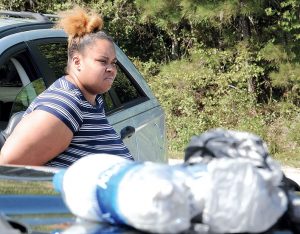 Romecia Milchelle Perry in custody, contraband Jamal Davis is accused of bringing to Tabor Correctional Institution on the hood of a TCPD vehicle. (Deuce Niven, TLT)

Perry, after dropping Davis off, had gone to Ralph Spivey Road, a short distance west of the prison down Swamp Fox Hwy West, and was waiting for Davis to call, Sibbett said.

“We watched him get out, go through the woods,” Sibbett said. “He laid down, so as not to be seen, then he made that move towards the fence and we sprang on him.”

Davis had two plastic soft drink bottles that had been cut open, the contraband placed in side. In addition to the cell phones and tobacco products, agents found a green leafy substance that will be tested by a state lab before charges related to it are filed, Sibbett said.