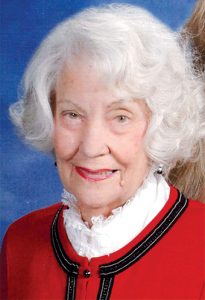 Born Nov. 17, 1930 in Columbus County, she was the daughter of the late William Eddie Cartrette and Lennie Fowler Cartrette and the widow of Kermit Grant Hinson.

Visitation was planned from 6 to 8 p.m. Saturday, Aug. 31, in Inman Ward Funeral Home.