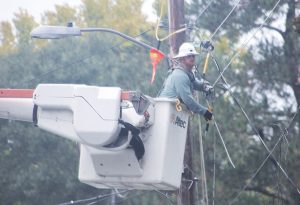 Duke Power contractors were working to restore power after a tree fell across lines on Pireway Road in Tabor City Thursday afternoon. Several isolated outages related to fallen trees were reported in the Tabor-Loris Community during the day, but there have been no widespread outages as of 6 p.m. (Deuce Niven, TLT)

Curfew orders are in place in Columbus and Horry counties, with an additional open-ended curfew ordered for Loris.

Curfews for Loris and Horry County begin at 7 p.m., with the county’s order to expire at 7 a.m. Friday, the Loris order stating “until further notice.”

“Transit during the curfew will be prohibited, with the exception of emergencies. Please stay off the roads until conditions are safe.

“For more information regarding the curfew, contact the Horry County Emergency Operations Center Phone Bank at 843-915-5150.”

Horry County Council has also approved the transfer of disaster reserve funds for immediate recovery needs “in the aftermath of Hurricane Dorian.”

Coordinating emergency response is the job of 911 centers across the country, and officials in Columbus and Horry counties say they are prepared.

Information from the North Carolina 911 Board was shared this afternoon by Columbus County Public Information Officer Amanda Prince.

“North Carolina 911 centers in the southeastern and coastal regions have made preparations to route calls to back-up 911 centers in unaffected areas of the state if necessary due to weather or call volume,” a news release said. “Rerouting calls is common practice during weather-related emergencies and ensures that North Carolina residents will not experience a disruption of service due to the hurricane. The professionals at the back-up 911 centers will be able to assist callers quickly and effectively.”

A curfew has been ordered for Columbus County effective between 8 p.m. tonight and 6 a.m. Friday.

“Hurricane Dorian remains a serious threat to our area as heavy rains and localized flash flooding are forecasted for Columbus County throughout the day Thursday and into early Friday morning,” county public information officer Amanda Prince said in a news release. “County officials remain concerned about limited visibility during evening hours and have determined that maintaining the curfew at night is in the best interest of public safety.”

Exceptions to the curfew include:

All of the exempted classes must carry proper identification.

Wind speeds are rising and the time to stay off the roads is rapidly approaching, emergency officials in Columbus and Horry counties say of central areas of both counties.

Peak sustained winds from Dorian in the Tabor-Loris Community were forecast in the mid 50 miles per hour range, the latest data from the National Weather Service showed, though forecasters warned that any shift in the storm track could impact those numbers.

Shelters in the region continue to add evacuees, though none were approaching capacity. In Columbus County there were 182 evacuees at five shelters across the county, public information officer Amanda Prince said in a news release, Edgewood School leading the numbers at 62. Edgewood is the only pet friendly shelter in the county.

“Water is one of the most deadly components of major storms and unfortunately isn’t taken seriously enough,” said Tiffany Wright, AAA Carolinas spokesperson. “Many motorists have a false sense of security behind the wheel when they encounter heavy rainfall and flooding but they shouldn’t. Just a few inches of water can turn a vehicle into a boat, and could put lives in danger.”

AAA urges motorists to adhere to the driving tips below if they encounter rising water on the roads:

Responding to a Skid

Even the most careful drivers can experience skids. If a driver feels their car is about to skid, don’t panic and follow these basic steps.

Flooded roads can cause a vehicle to stall and result in severe damage to the vehicle from:

DO NOT remain in the car. Adhere to the following steps:

“As Hurricane Dorian continues to slam the coast and surrounding areas, flooding will be a major concern and although we hear it all the time we can’t stress ‘turn around, don’t drown’ enough,” Wright said.

A tornado threat and increased flash flood dangers for Columbus and Horry counties were sounded by the National Weather Service as Hurricane Dorian approached Thursday morning.

About 80 miles southeast of Charleston at 6 a.m. Thursday, Dorian was expected to skirt the Cape Fear coastline, late this afternoon into the evening, tracking very close to the southeast NC coast overnight and off Outer Banks early Friday.

Tornado warnings were issued in northeastern Horry County and northeastern Columbus County after dawn Thursday, with one possibly touching down in Little River, the Weather Service said.

Storm surge along the coast remained the biggest threat from Dorian, a Category 3 hurricane Thursday morning, but rainfall estimates for most of Columbus and Horry counties exceeding 10 inches.

Shelters in the area were reported at well below capacity, with 41 at the South Columbus High shelter Wednesday night, none at Guideway Elementary. Edgewood Elementary, the only pet friendly shelter in Columbus, reported 31 evacuees.

Power outages should be reported to the appropriate power companies. Reports of power lines down and trees in the roadway should be made to emergency officials:

A Columbus County man’s death attributed to storm preparation in advance of Hurricane Dorian came as evacuation shelters have opened and new closings have been announced for the county.

Gov. Roy Cooper discussed the man’s death during a news conference on storm preparation Wednesday. North Carolina Department of Public Safety officials said the death took place Monday, when the man fell from a ladder while trying to make his home ready for the hurricane. The man died at Cape Fear Valley Medical Center in Fayetteville, NCDPS officials said.

Gov. Cooper said the death “reminds us that preparations for storms can really be a dangerous activity.”

Impacts from Dorian, moving to the north off the Florida coast Wednesday morning, will be felt in the region later today, the National Weather Service reported.

Forecast tracks that keep the worst of the storm off the coast could prove optimistic, if Dorian wobbles to the west, forecasters said.

Flooding was the key issue raised by the NWS in a late morning presentation, with moderate flooding on the Waccamaw River at Conway possible.

Peak sustained winds in the Tabor-Loris community, the NWS forecast late Wednesday morning, could be about 55 miles per hour.

Public schools in Columbus and Horry counties are closed for the rest of the week, colleges in Horry, too. Southeastern Community College will close at 2 p.m. today, through Sunday, with activities to resume Monday if circumstances allow.

Columbus County Courthouse will close at 2 p.m. today, Clerk of Court Jess Hill, with a decision to re-open Friday tentative, if the weather allows.

Loris City Hall closed at noon today, with one final candidate for City Council beating the deadline. Businessman Ricky Dew filed for the single seat open for a two-year unexpired term, and will face former city attorney Carroll Padgett on the November ballot.

Phones at Loris City Hall will be manned through 5 p.m. today, City Clerk/Treasurer Kenya Wright said, but city offices will be closed until further notice.

A city Emergency Operations Center will likely open Thursday, Wright said. Earlier plans to open the EOC this evening have changed because of the slow approach of the storm, Wright said.

“Now is the time to be prepared,” Wright said in an e-mail update. “Pray for the best, but please be prepared for the worse.”

A curfew may be ordered for Thursday night, Wright said, depending on conditions.

If a curfew is ordered, a city owned siren at the Public Safety Building will sound for about a minute and the notice posted on social media and other outlets.

Horry County government has transitioned to OPCON 1, its highest readiness level, and activated its Emergency Operations Center. The county’s Phone Bank is operational. Residents with questions may call 843-915-5150.

Once storm winds reach tropical storm strength, 35 miles per hour, residents should state in a safe place and not drive, a news release from the Columbus County Emergency Operations Center said.

NC Department of Transportation crews won’t be out under those conditions, and most emergency responses will cease sooner after.

“Many preventable fatalities and injuries occur in the aftermath of the storm due to driving on unsafe roads,” the news release said. “Please remain in a safe location until NCDOD officials have had the opportunity to access road conditions.”

Residents should report power outages to the appropriate power company. They include: