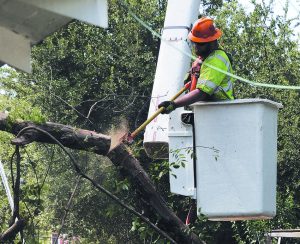 Columbus County’s solid waste transfer station will be open Saturday and accepting residential garbage free of charge for residents whose trash was not picked up this week due to Hurricane Dorian.

Located at 113 Landfill Road, Whiteville, the station will be open from 7:30 a.m. to noon.

“We apologize for the inconvenience due to Hurricane Dorian; however, Waste Industries will be resuming their normal trash pick-up routes on Monday, Sept. 9, a news release from county public information officer Amanda Prince said.

County recycling centers will resume their normal operating hours Saturday, open from 8 a.m. to 5:30 p.m., closed for an hour beginning at noon for lunch.

“Please be advised that no household trash can be collected at any of these facilities,” Prince said.

An announcement from Coastal Carolina University on when classes will resume there had not been made by Friday afternoon. 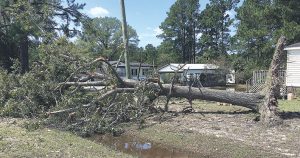 A tree down in Cane Branch, some think by a tornado, but that has not been confirmed by the National Weather Service. (Jenn Causey, TLT)

High winds to be sure, some think a tornado touched down on Bluebird Road in the Cane Branch community near Loris in Horry County, local residents said.

A tree was down there, and the remnants of an above-ground swimming pool was left hanging high in a tree.

Look for updates here as events warrant and a complete wrap-up in the next Tabor-Loris Tribune in print and online.

Brunswick Electric and Lee Electric crews stage near the BEMC substation on Mill Branch Church Road near Tabor City Friday morning. Power outages in the area were not widespread, with restoration for most customers expected Friday. (Deuce Niven, TLT)

Emergency operations were beginning to shut down, and an incident involving an allegedly drunk and disorderly woman at a the shelter at West Columbus High School Wednesday was described.

Principals were assessing conditions at schools across Columbus County on Friday, with a decision on opening schedules likely on Saturday, school district spokesman Kelly Jones said.

Residents were heading home from most area shelters, with those at Guideway Elementary, West Columbus and East Columbus high schools closed by 9 a.m. Friday, the rest of the county shelters closed by 11:30 a.m.

Emergency Operation Centers in Columbus and Horry counties closed Friday morning, and public access phone lines at those centers were shut down.

Tabor City Hall was set to re-open at noon Friday, while municipal offices in Loris will remain closed until Monday morning.

“These limited operations are due to several employees working around the clock throughout the storm and we would like to allow them time to rest and access their properties,” Loris City Clerk/Treasurer Kenya Wright said.

City crews in both municipalities were involved in assessments and cleanups, though not major issues were reported. 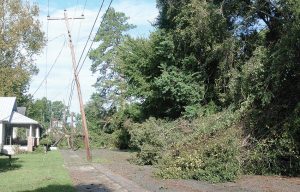 Trees fill a section of Garrell Street Friday morning. They came down as winds picked up during Hurricane Dorian’s pass through the area Thursday evening. (Deuce Niven, TLT)

Fallen trees into power lines caused most if not all of the isolated power outages in the Tabor-Loris Community, perhaps none more significant than on Garrell Street in Tabor City, where at least four trees came down, completely blocking the road and taking utility cables with them Thursday evening.

“We got the call about a tree on a power line,” Tabor City Fire Department member Ronnie Graham said as he surveyed the scene Friday morning. “We got here and were walking up to see what was involved when more trees started coming down. We got out in a hurry, there was nothing we could do here.”

Power and other utility crews were expected to make repairs Friday. A generator at one nearby home could be heard as those crews began to assemble.

Most residential trash in Loris is collected on Monday and Tuesday. Those with two-day pickup including a Thursday schedule should see those collections today.

As shelters in Columbus County opened Wednesday one woman found herself taken to jail instead, charged with being drunk and disorderly, assault on a law enforcement officer, and more.

Fachies Thallies Tyler, 40, of Scott Circles, Fair Bluff, was at the shelter at West Columbus High School, allegedly “using profanity and being belligerent” with a deputy and others at the shelter, Columbus County Sheriff’s Office spokeswoman Michelle Tedder said Friday.

When the deputy “observed the smell of alcohol emitting from her person,” Tyler “was asked to leave the shelter but began arguing with another shelter occupant,” Tatum said. “While attempting to arrest Tyler, she struck the deputy in the face..

In addition to the drunk and disorderly and assault on an officer charge, Tyler was charged with resisting an officer and trespassing. Instead of finding shelter at the school, she was held at the Columbus County Detention Center under a $1,000 secured bond. 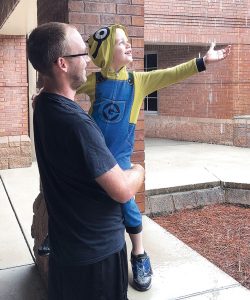 Hurricane Dorian largely spared the Tabor-Loris Community during its slow slog through the region Thursday into Friday morning, lingering impacts this morning including limited power outage and some delays in garbage collections.

Power outages were far fewer inland, Duke Energy reporting about 2,000 customers in Columbus County without power at about 8 a.m. Friday, Brunswick Electric only 713 in Columbus. Santee Cooper was reporting about 7,000 without power in Horry County, only a handful of those in the immediate Loris area. Horry Electric reported more than 11,000 without power in Horry, fewer than 200 of those in the Loris and Green Sea area, more than 1,200 in Longs.

Sanitation services will be delayed because of Dorian, in Columbus County Waste Industries reported that collections for Thursday and today will not take place, the company to take larger than normal amounts on the regular scheduled pick-up dates next week.

Waste Management, which collects in Whiteville and Tabor City, was to collect one day later than normal for the end of this week in Whiteville, a city news release said. Tabor City Town Manager Al Leonard said he had not yet confirmed that delayed schedule with Waste Management as of Friday morning.

Curfews ordered for Columbus and Horry counties and the City of Loris were all lifted this morning.

Look for updates here as events warrant and a complete wrap-up in the next Tabor-Loris Tribune in print and online.