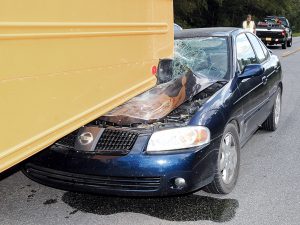 Hood, windshield and more damage evident to this Nissan after slamming into the rear of a school bus Friday. (Deuce Niven, TLT)

One minor injury was reported after a Nissan Sentra plowed into the back of a Columbus County Schools bus east of Tabor City Friday afternoon, its driver disappearing down a nearby logging road, witnesses said.

Witnesses, including the bus driver and the Nissan passenger left behind, said the driver grabbed a bag and ran following the crash on Peacock Road near Ken Ray Drive.

There were no students on the bus, the driver said she was slowing to turn into the logging road in order to turn the bus around after discharging the last of her students, when she saw the Nissan barreling towards the bus, the striking it in the rear.

Students from Tabor City Elementary and Tabor City Middle schools were on the bus earlier in the afternoon.

An investigation by the North Carolina Highway Patrol was underway Friday afternoon.