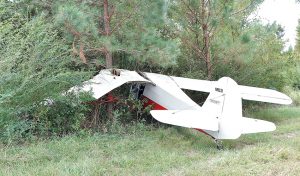 A single-engine plane crash in the Longs area Tuesday morning resulted in no serious injury for the pilot, who declined an Horry County Fire Rescue invitation for transport to a hospital, the agency reported.

Crews were dispatched just before 11 a.m. to the crash in the 10000 block of South Hwy 905 in Longs. The pilot reportedly ran out of fuel, and HCFR reported no fuel hazards resulting from the forced landing.