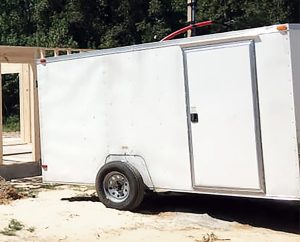 A Cargo trailer with $30,000 worth of power tools and equipment was stolen from near Tabor City, and the Columbus County Sheriff’s Office is asking the public for help in locating it.

Deputies responding to a home in the 1200 block of Vinegar Hill Road Tabor city just before 8 a.m. Thursday were told the trailer went missing during the night.

A sheriff’s report said the Cargo trailer was 7 by 14 feet with a V nose. A Facebook post by the wife of the owner said “Nobles Construction” is on the trailer. It has doors on the rear and side, and is missing a wheel fender on the right side.

“Sheriff Jody Greene would like to ask the citizens of Columbus County for their assistance in locating this trailer as well as any information regarding the whereabouts of other stolen property,” the news release said. “Additionally, Sheriff Greene wants to remind the public that it is important to pay attention to what is going on around you and to call 911 if you see anything suspicious.”

Look for more on this story as events warrant, and in the next Tabor-Loris Tribune in print and online.