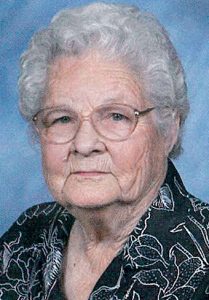 Tempie Louise Fowler Soles of Tabor City died Wednesday, Oct. 23, in her home. She was 94.

Born Dec. 2, 1924 in Horry County, she was the daughter of the late Berry Alford Fowler and Louettie Fipps Fowler and the widow of Jettie Bruce Soles.

In addition to her parents and husband, she was predeceased by three brothers, William Fowler, Vernon Fowler and Wilton Fowler.

Visitation was planned from 7 to 9 p.m. Thursday, Oct. 24, in Inman Ward Funeral Home.