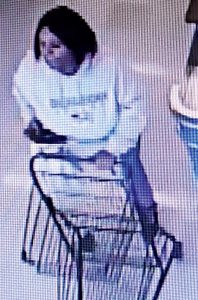 A check fraud case that began in Whiteville had led to Tabor City and an effort to identify the woman who passed at least one check at a local Food Lion, Det. Christopher Hilburn of the Tabor City Police Department said Monday.

Police have obtained imaged of the woman they believe responsible for passing a check at the Tabor Crossing Food Lion just after 11 a.m. on Nov. 2.

“If anyone knows who she is, we ask that they call us,” Hilburn said.

ED Ezzell General Contractor owner Edwin D. Ezzell, 63, told police that he noticed on his online banking page that four checks he did not write had been passed at area Food Lion stores, including the one in Tabor City, a Nov. 8 report by Officer Stephen Conner said.

Ezzell said the actual checks were still in their original packaging and in the Whiteville office of his accountants. Still, a check with the same number was passed at the Food Lion in Tabor City.