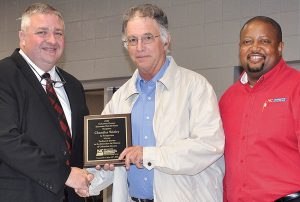 Chandler Worley, a Fair Bluff area farmer whose family has made a living from the land for years, was honored as the newest member of the Columbus County Extension Hall of Fame during the 2019 Farm City Week Dinner held Tuesday at South Columbus High School.

Cape Fear Farm Credit branch manager Kevin Kinlaw made the presentation to a crowd of some 130 in the South Columbus auditorium. Kinlaw said Worley had made a lifelong commitment to excellence in agriculture.

“I just had a heart attack last year and almost didn’t make it,” Worley said, accepting the award. He said he was grateful.

North Carolina Farm Bureau President Larry Wooten, set to retire at the end of the year, was the evening’s keynote speaker, and said the state of agriculture worries him.

“There can’t be sustainability without profitability,” Wooten said. “North Carolina grows half of the tobacco in the country and tariffs with China and other countries are hurting farmers.  We must export 40 percent of the cotton we grow, also.

An outspoken advocate for agriculture, Wooten’s stop in Tabor City will be among the last public appearances. During Tuesday’s visit Ester Collier presented him with a painting of a pier at Lake Waccamaw. – tribjenn@tabor-loris.com, tribdeuce@tabor-loris.com