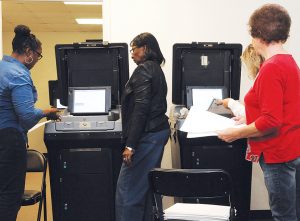 A recount process involving the second seat on Tabor City Council was abruptly halted more than seven hours in late Friday afternoon after State Board of Elections staff became aware that two of the five Columbus County Board of Elections members had left during the process.

That process was tentatively scheduled to resume at 2 p.m. Monday, assuming every board member is able to attend.

Board member Kay Horne left shortly after noon to begin a long-planned trip to visit family in the Washington, D.C. area, while JoAnn Garrell left shortly before 2 p.m. for a medical appointment.

Board members proceeded, and said they believed the three members left, a quorum, would be sufficient to conduct board business.

Columbus County Acting Elections Director Kathy Enzor, later in the afternoon, consulted with state board members and staff by telephone on how to handle a discrepancy in the write-in vote totals in the race involving Tabor City Council member Nelson Lee and challenger Ronnie Graham.

It was during that conversation that the state board staff became aware that Horne and Garrell were no longer present for the recount. Columbus board chair Bonita Blakney joined the conversation with Enzor and state board officials, in private.

When the women returned, they told the rest of the board and others present of the state recommendation, and the meeting that began at 10:16 Friday morning was recessed at 5:35 p.m. 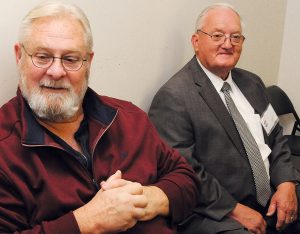 Nelson Lee, left, and Ronnie Graham await results that did not come Friday in the still unsettled race for a second seat on Tabor City Council. (Deuce Niven, TLT)

Graham held a 1 vote lead over Nelson, 164 to 163, following last week’s canvas of the votes. Partial results of the recount Friday showed that Graham an election day vote, and that Lee may have gained a write-in vote, though that was not completely clear, nor was it confirmed by election staff.

If those results hold, Lee could end up with a one-vote lead, or the men could be in a tie, the outcome to be determined by the flip of a coin or other “casting of a lot,” Enzor said.

Look for an update on this story as events warrant, and the full story in the next Tabor-Loris Tribune in print and online.