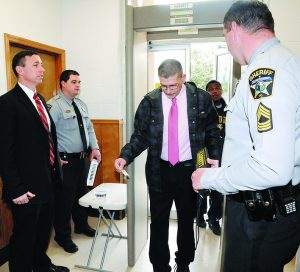 Previous improvements to the Tabor City Court Building have included the addition of a metal detector for security. (Deuce Niven, TLT)

Monthly District Court in Tabor City could be effectively ending early next year, but local law enforcement and judicial leaders are pointing the facilities original use as a means of saving it well into the future.

Chief District Court Scott L. Ussery, who schedules District Court sessions in Columbus and Brunswick counties, has not scheduled sessions in Tabor City beyond March, with February taken off the schedule to accommodate early voting for the March 3 primaries.

Court calendars for April through June to not include court dates in Tabor City.

Judge Ussery notified officials, including District Attorney Jon David and Clerk of Court Jesse Hill of his decision in a Dec. 10 email, citing safety concerns that “not only revolve around the court facility, but also around the use of that facility by the North Carolina DPS (Department of Public Safety) when transporting prisoners from the medium/close custody facility also located in Tabor City.

Judge Ussery noted that he does not have the authority to close the courthouse in Tabor City. State law that in 1968 established Tabor City as a seat of court can only be reversed by an act of the legislature, the judge said.

Safety concerns, however, provide “ample reason” not to schedule court in Tabor City “for the foreseeable future,” Judge Ussery said in the e-mail.

Hill, the Clerk of Court, said court in Tabor City initially involved only traffic cases, and that was the intent of the legislature when establishing its use.

Both Hill and Sheriff Jody Greene said they support keeping the courthouse open, and that returning its use, handling traffic cases only, could achieve that goal.

“My main concern is keeping court in Tabor City and making it safe,” Hill said. “I think we can do both of those things.”

“I’m all for keeping this courthouse open,” Greene said. “I feel certain there’s some common ground.

“My part is security for all of the people involved, from the prisoner to the judge.”

Greene said a team with the North Carolina Sheriff’s Association works with jails and courts to assess safety, identify weaknesses, and make recommendations to address those issues.

An assessment team will be coming to Columbus County early in the new year, Greene said, and will review both county Detention Center operations and court safety in Tabor City.

“Let’s just sit and let them make the assessment,” Greene said. “Then we’ll know what we need to do.”

Both Hill, Greene, and Tabor City Town Manager Al Leonard said they would support a moving to remove criminal cases, including first appearance hearings, from the court docket in Tabor City, leaving the local court with an exclusive mandate to handle traffic cases. There may be legislative support for that change, too.

“This court was designed for traffic,” state Rep. Brenden Jones of Tabor City said. “There is absolutely no reason that we can’t continue this courthouse as a traffic courthouse.”

For more on this story, see this week’s Tabor-Loris Tribune, in newsstands Monday because of the Christmas holiday.