A National Weather Service team from Wilmington confirmed Monday afternoon that an EF-1 tornado was responsible for the damage, which also impacted a billboard and stop lights at Hwy 66 and SC 9 business east of the school, and another business building further east, Officer Keith Massey of the Loris Police Department said.

An apparent tornado hit the parking lot at Loris High School damaging dozens of vehicles a scant 10 minutes before early dismissal for some students after noon Monday, said Chief Gary Buley of the Loris Police Department.

There were no reported injuries.

“Another ten minutes, with early dismissal, there would have been students in the parking lot,” Buley said. “We were blessed.”

Band Director Steve Whisnant reportedly saw the apparent twister approach and ushered some students back into the building moments before it hit the parking lot, though he said he could not confirm or deny that without approval from the School District Office.

Whisnant said the apparent twister, which seemed to touch down near Heniford Field, did some damage there before hopscotching to the school parking lot. 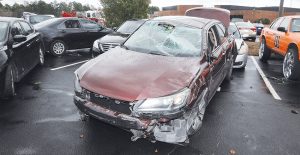 “The band trailer flew inside the football field and landed,” Whisnant said. A nearby tree was also felled.

Student H.H. King IV, a senior at Loris High, said some students were in the cafeteria as heavy rain and wind from a lighting packing thunderstorm hammered the campus.

“We were all sitting there, looking at the rain,” King said. “All of the sudden the courtyard started going crazy, the rain was swirling up.”

King’s pickup truck was one of dozens damaged by the apparent twister, that damage relatively minor, with one side mirror blown out, three others spiderwebbed and appearing ready to shatter.

At least two vehicles appeared to have gone airborne, landing atop others in the parking lot. Other vehicles were twisted from their spots, one, windshields smashed, fenders, hoods, and roofs crumpled.

“I’ve been interviewed by folks I never heard of,” Buley said. “From CNN, NBC.”

Tallying the damage will take some time, Buley said, with entire rows of vehicles with damage, ranging from broken glass to total losses.

Horry County Police Department officers and Loris Fire Department were on hand to help with traffic control and render assistance. One lengthy report will detail the losses.

“I checked to see if we could do this with one report,” Buley said. “We can, it’s an act of God.”

For the students at Loris High, many of the onlookers said, an act of a merciful God.

“Thank God no one was hurt,” Buley said.

Look for more on this story in the next Tabor-Loris Tribune in print and online. – Additional reporting by Jenn Causey