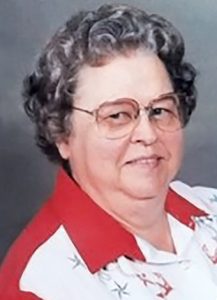 Born Aug. 18, 1939 in Columbus County, she was the daughter of the late Bert Nobles and Ovaline Allen Nobles and the widow of William Rudolph “Billy” Fisher.

In addition to her parents and husband, she was preceded in death by one son, Eugene Tompkins; three brothers, Billy Nobles, Bobby Nobles and Earl Nobles.

Visitation was planed for the hour preceding the service in the chapel.