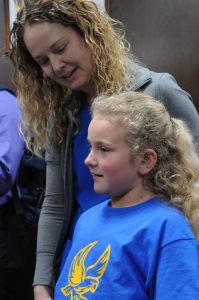 Kelly Lovett and daughter Callie Lovett ask the Columbus County Board of Education to save Guideway School. (Deuce Niven, TLT)

Eleven residents of the area spoke during the public comment period of the meeting, all asking that the board at least put off a decision on closing the school until a new school in Tabor City is completed, now expected in 2022.

“If Guideway school is to close, you just as well might close our whole community,” the final speaker, Lynne Thompson said.

Supt. Dr. Deanne Meadows said the school’s budget hole is getting deeper, with potential revenue losses from a new Charter School expected to open in Chadbourn next fall, and payment on new debt coming for a new school in Cerro Gordo coming next year.

Meadows said the $2.4 million savings projected in the consolidation plan, based on current enrollment, may prove to be not enough.

In the short term, Meadows said, the school board will likely need some additional county funds this year to meet budget shortfalls, including unexpected expenses that came from a cyber-attack on the system’s technology infrastructure last fall.

Look for more on this story in  the next Tabor-Loris Tribune in print and online.