Swamp flooding in the Green Sea area early Friday, on the heels of a night of heavy rain that also brought high winds to the area, appeared to be the most serious of the local impacts from a weather system that brought far worse destruction, and loss of life in other parts of the Carolinas and in a broad swath of the U.S. 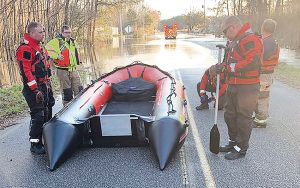 There were no reported injuries, with the HCFR crew dispatched at 6:46 a.m.

Trash cans placed at the roadside for regular pick-ups in Columbus County were widely reported overturn, at least one person describing some as “projectile trash cans” that slid into the roadway, forcing some drivers to drive around them.

Power outages were reported during the night and into Friday morning in both Horry and Columbus counties, the majority in Horry closer to the coast, while the most significant outages reported in Columbus County were south of Chadbourn, near Ward’s Station.

Fire crews in both counties responded to several calls involving downed trees, with that threat not over yet. Gusts today could reach from 40 to 50 miles per hour, the National Weather Service office in Wilmington reported.

Those winds “will blow around loose and unsecured items, tree limbs will be blown down, and a few power outages possible today,” the NWS briefing said. “Marine conditions will also be very hazardous.”

Those winds will bring a weak cold front into the area through Saturday night, with forecasts of freezing or near freezing temperatures as early as tonight, with highs Saturday near the mid-50s before a warming trend beginning Sunday.