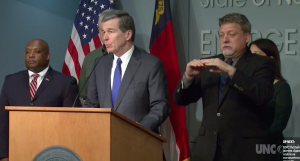 Southeastern Community College will be closed to students and employees Monday as leadership there works to determine the next steps for the college in the midst of the COVID-19 outbreak, the college announced Saturday.

The announcement came hours after Gov. Roy Cooper announced a two-week closing of all public schools across North Carolina, and a ban on gatherings of more than 100 people.

Horry Georgetown Technical College has cancelled all classes next week, and a move to online instruction for all classes for the rest of the spring semester, and HGTC announcement said.

“The decision has also been made to move all in-person classes to online instruction after spring break for the remainder of the spring semester,” the HGTC announcement said. “Beginning March 30, HGTC will move to an online delivery method and students will receive additional information about the transition to online later this week.

“All HGTC faculty and staff should report on Monday as usual.”

Updates will be distributed by e-mail, website, social media and area media outlets, both intuitions said.

Public schools across North Carolina, including Columbus County, will be closed for the next two weeks beginning Monday, by executive order of Gov. Roy Cooper announced during a Saturday afternoon news conference.

Gov. Cooper’s included a prohibition on “mass gatherings of more than 100 people,” but excludes restaurants, shopping malls and other retails stores, though the governor encouraged everyone to practice social distancing in those situations, restaurant owners and other business owners to take steps to protect their customers.

While students will be at home, staff in the Columbus County Schools is instructed to report to school at the normal time Monday for a workday, school spokesman Kelly Jones said. That workday, Monday, is mandatory, Jones said.

“This is a rapidly evolving situation, and we will have more information for staff at that time,” Jones said.

This is the decision that no one wanted to see happen, but it is the right decision, and I thank Gov. Cooper for making this decision,” state Supt. or Public Instruction Mark Johnson said.

Work began last week preparing for the possibility of closing schools, Johnson said, though the decision was not made by Gov. Cooper working with a COVID-19 team until Saturday.

Cooper said there was no change in recommendations from the US Centers for Disease Control, but that other factors prompted his decision.

“Seeing increased anxiety, fear, from parents, teachers, from superintendents across our state,” Cooper said. “We’re seeing a patchwork of schools beginning to let out our schools. We’re seeing parents keeping kids out of school.

“We need a period of time to assess the threat of COVID 19. Need a coordinated statewide response.

“We don’t want to be looking in the mirror to be regretting not doing this. I think it’s important for the health, safety and welfare of our state to do it.”

Gov. Cooper’s order came just hours after the Wake County Schools reversed a decision Friday not to close schools as the number of positive cases there has climbed, including a teacher in the district.

Gov. Cooper said the positive test from the teacher did not play a role in his decision.

Every positive test reported in North Carolina, so far, has been as a result of direct transmission from an infected person, and not “community spread,” NC Department of Health & Human Services Secretary Dr. Mandy Cowan said.

A Brunswick County resident who apparently contracted COVID-19 while in Louisiana is in self quarantine at home, multiple news outlets reported, with a presumptive positive test for the virus. That test is considered presumptive until confirmed by the CDC.

At least two new cases were reported in South Carolina Saturday, and both the governor at Horry County government have declared states of emergency as a result.

There have been no reported positive or presumptive positive tests for COVID-19 in Columbus or Horry county’s as of Saturday afternoon.

A state team consulting with local school districts will be working on plans for distance learning and to provide meals for students who count on the school feeding programs, both Gov. Cooper and Supt. Johnson said.

Both Johnson, a Republican, and Cooper, a Democrat, said they are working with legislative leaders from both parties, and that dealing with the coronavirus threat trumps politics.

A statement from the North Carolina Association of Educators was supportive of the governor’s decision.

“We appreciate Governor Cooper’s careful consideration of all the impacts a statewide closure of our public school system would have on educators, students, parents, and the wider community,” the statement said. “Ultimately, we think this is the correct decision, and we thank him for acting decisively in the best interest of everyone involved.”

Look for more information here, and in the Tabor-Loris Tribune in print and online as events warrant.