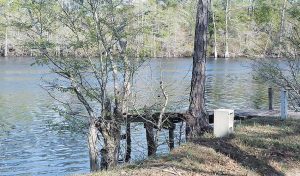 A view of the Waccamaw River. (File photo)

Two Columbus County residents are dead, and a search for a third involved in a two-boat collision on the Waccamaw River near Pireway late Sunday afternoon resumed this (Monday) morning, a N.C. Wildlife Resources Commission supervisor said.

Two boats came around “the same curve at the same time and collided,” Sgt. Kyle vanAlthuis.

Pronounced dead at the scene were Megan Lynn, 21, of Whiteville and Jennifer Hayes, 37, of Chadbourn, vanAlthuis said.

Smith, Lynn and Hayes were passengers in a 15-foot Dixie boat operated by Travis Reed Suggs, 25, of Tabor City, vanAlthuis said. Their boat was travelling upriver, towards the boat landing, when the collision took place.

Matthew Edward Ferster, 33, of Shallotte was operating a 18.5 foot Skeeter boat, heading downriver, with one male passenger, vanAlthuis. Neither Ferster nor his passenger were injured, vanAlthuis said.

Both Suggs and Ferster, the boat operators, were charged with boating while impaired, vanAlthuis said. An investigation is ongoing, with no determination yet on who may have been at fault, or additional charges.

River conditions were good at the time of the collision, and during the search, with the river level high, currents moderate, vanAlthuis said.

Look for updates on this story here, as events warrant, and in the next Tabor-Loris Tribune in print and online.