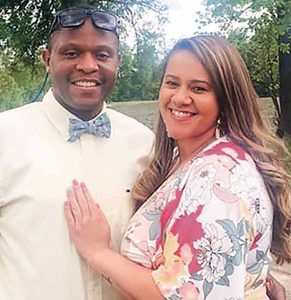 Same goes for the woman he pulled from a burning car sideways in a canal east of Tabor City early Saturday, though her toddler son likely has no idea of what might have been.

Riggins, days later, said it was the grace of God that put him and his girlfriend Krystal Young at the right place at the right time.

Fire in a ditch

Riggins, a veteran officer and Patrol Commander at the Whiteville Police Department, noticed the car on fire on Peacock Road shortly after 2 a.m. Saturday. He and Young were heading home after visiting family.

“My initial reaction was that somebody had set another pretty car on fire.”

Getting closer, Riggins realized the car was sideways in a deep canal, its occupants, if there were any, clearly in trouble.

“When I got close enough to it, the driver’s side was down in the canal, and I saw the fire,” Riggins said. “The entire hood was completely engulfed in flames.

“I think I yelled, I head the female yell. She was crying, she was hysterical.”

Riggins jumped into the canal, Young following, as he reached the doors.

“By the grace of the good Lord the passenger back door was unlocked,” Riggins said. “Smoke was rolling out the inside. There was air bag dust. I couldn’t see her, but I heard her.

Courtney Sutton was fighting for her life, and for that of her three-year-old son Dominique McKever, Fowler said. Dominique was in a car seat, likely a life saver after Sutton lost control of the Chevrolet Malibu, it striking a drainage tile as the car careened sideways into the canal, Fowler said.

Unable to see through the smoke and dust, Riggins shouted to Sutton, where was the boy.

“She pushed him up to me,” Riggins said. “I saw his little hands coming out. I reached in and grabbed him, snatched him out and handed him to Krystal.

By then fire was rolling from the hood, flames extending from the dash to the front bumper. Riggins said he ran back to the car, again opened the back door.

“I grabbed her,” Riggins said. “I don’t remember how. It was by the grace of the good Lord that I scooped her up. She got across the canal, stood in the road, waiting for the ambulance and the fire department.”

See more of this story and much more Tabor-Loris Community news in this week’s Tabor-Loris Tribune in print and online now.