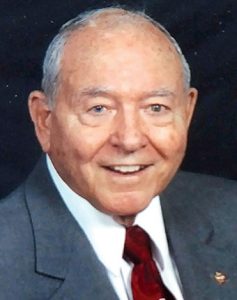 Kenneth Wesley Adkins passed away on Sunday, April 5, at his home in Florence. He was 93.

Mr. Adkins was born on Dec. 30, 1926 in Sarcoxie, Missouri, to the late Edison G. Adkins and the late Inez Capitola White Adkins.

Mr. Adkins served his country with courage, honor, and dignity in the United States Navy during World War II. After WWII, he joined the United States Marine Corps and served in both Vietnam and Korea retiring with over 24 years of distinguished service.

Mr. Adkins was a member of Living Water Baptist Church in Longs.

Due to CDC regulations and the Coronavirus only a limited amount of people will be allowed to attend the service.

The family appreciates your prayers and support during this difficult time.