Women tested for COVID-19 have seen more than twice as many positive results then men. See the story below.

Across the state line the global impact of the coronavirus pandemic was felt close to home as more than 100 inmates who are not believed infected with COVID-19 have been transferred to Tabor Correctional Institution as part of the state’s response at prisons hard hit by the pandemic.

That action comes as COVID cases were confirmed in Columbus and Horry and Gov. Roy Cooper said more money to feed children forced out of school had been approved for North Carolina.

Beaches, some businesses may reopen in SC, governor says

Public beaches may re-open in South Carolina effective at noon Tuesday, but only if local governments that have closed them as a result of the COVID-19 pandemic agree, Gov. Henry McMaster said Monday.

Leaders in some beach communities were considering the new order Monday, though none had announced a firm decision.

A number of retails stores previously ordered closed by the governor were allowed to re-open effective at 5 p.m. Monday, but with new restrictions designed to enforce social distancing to prevent disease spread, the governor said.

McMaster said the re-openings were part of a tiered effort to re-open business in the state, one that will be newly formed accelerateSC work group charged with developing a roadmap to “slingshot” the state ahead of competitors when the nation’s economy begins to rebound from the pandemic.

“We must be ready to stop on the gas when the green light comes on,” McMaster said.

Previously closed retail stores will have to abide by social distancing rules put in place earlier by the governor that limits crowding inside those buildings.

Those rules limit the number of customers in a store to 20 percent of its fire department occupancy of five customers per 1,000 square feet, whichever is less; and requires that businesses “must not knowingly allow customers to congregate within six feet of one another, excluding families, and follow relevant CDC and DHEC guidelines,” a news release from the governor’s office said.

Retail stores previously closed by the governor’s executive order and now allowed to re-open include:

All other businesses previously closed by executive order will remain closed until further notice.

More than 100 inmates have been transferred to Tabor Correctional Institution as part of North Carolina’s response to COVID-19 infections in state prisons elsewhere, the bulk of those this past week.

“The staff at Neuse have been working in the toughest conditions, for weeks on end, and desperately needed support,” said Todd Ishee, Commissioner of Prisons. “They are owed everyone’s thanks for their commitment to serving the public, standing tall in their daily responsibilities and helping ensure safety of their co-workers and those in custody.”

A mass testing operation of the approximately 250 employees and 700 offenders at Neuse Correctional Institution has revealed a total of 13 staff and more than 330 offenders are infected with virus and 98 percent of those are asymptomatic. Another 197 test results are pending, the DPS reported.

TCI accepted about 100 inmates from Southern Correctional, moved to help make room for the Johnston inmates.

“All transported offenders were medically screened – including temperature checks — before they were transported and when they arrived at their destinations,” a DPS news release said. “On their arrival, they were all placed under 14-day medical quarantine and did not mix with the existing offender population already housed there.”

“No offenders from Neuse or any of those exhibiting any symptoms were transferred,” Commissioner Ishee said. “These very strategic moves were done in consultation with medical experts and completed by following CDC guidelines.”

Transportation vehicles were disinfected before and after each trip. Offenders and staff were all outfitted with face masks. The transfers were completed without incident.

“Central Prison has a hospital where offenders who are seriously ill with COVID-19 can be treated in isolation,” Higgins said. “These transfers were done in order to free beds that are necessary to be used for those offenders who test positive for COVID-19.”

All of those transferred to TCI were North Carolina offenders, all “medically screened with temperature checks before they were transported and after they left the bus, before they entered the prison, where they are now under a 14-day quarantine and are separated from the rest of the population at Tabor as part of the precautions Prisons has been taking during this pandemic. All precautions were taken. And all this was done in accordance with CDC guidelines.”

Prevention: More than three dozen previous actions have been taken “to reduce the spread of COVID-19 in the prisons, and to contain it within a facility if it does,” the DPS reported.

Some of those actions include:

Those actions, along with the current public information on the number of offenders who have tested positive for virus statewide, can be found here.

Columbus COVID-19 count up by one; women hit twice as often

One new COVID-19 case was reported by the Columbus County Health Department Monday, bringing the county total to 61.

Four additional recoveries from the disease were reported by the county, that total now at 12, with three deaths.

New demographic information released by the health department showed COVID-19 cases confirmed in more than twice as many women as men, 43 female and 18 male; and more African-American people infected than white, 33 to 28, though the demographic breakdown in Columbus County is 23.1 percent to 68.9 percent respectively. 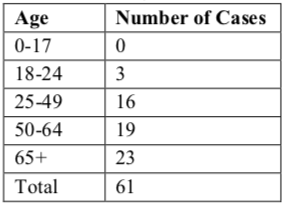 The latest positive COVID-19 patient in Columbus is connected to a previous positive case, the health department reported.

“The Columbus County Health Department will continue to follow CDC guidelines to protect public health and limit the spread of infection,” the news release said. “Based on information provided by the individuals, county public health officials will assess risks of exposure, and determine which, if any, additional measures are needed such as temperature and symptom checks, quarantine and/or testing.

Statewide there are 6,764 confirmed COVID-19 cases in 93 North Carolina counties, with 179 deaths, the NC Department of Health and Human Services reported Monday.

Regularly updated information from the Columbus County Health Department is available on its Facebook page here.

Another COVID death, one new case in Horry

Another death resulting from COVID-19 in Horry County came with another newly confirmed case, that one in the Loris Zip Code, bringing that local total to 12, South Carolina’s Department of Health and Environmental Control reported Monday.

DHEC data showed 12 people infected with COVID-19 in the Loris Zip Code, up from 11 Sunday; with one case in the Green Sea Zip Code, that number unchanged.

South Carolina’s total confirmed coronavirus cases hit 4,439 Monday, up by 64 from Sunday, with four additional deaths, bringing that total to 124.

Federally funded, the program will allow the state’s Department of Health and Human Services to help families purchase food for children impacted by school closings due to COVID-19, the governor said in a news release.

NCDHHS is working to operationalize the program and families will begin to receive this benefit in coming weeks.

“So many families are in need, especially with so many out of work right now. This approval helps people get assistance faster to feed their families,” said Governor Cooper.

The program provides a benefit on an EBT card to North Carolina families whose children are eligible for free and reduced lunch at school. Families will receive $250 in P-EBT benefits per child, provided in two installments, with the possibility of an additional benefit if North Carolina schools are closed beyond May 15. Families will be able to use the P-EBT benefit to purchase food items at EBT authorized retailers, including most major grocery stores.

Families will not need to apply for the P-EBT program. P-EBT eligible families already receiving Food and Nutrition Services (FNS) benefits will receive an additional benefit on their existing EBT card. P-EBT eligible families not already enrolled in FNS will be mailed a new EBT card in the next few weeks. Families who receive a new EBT card will receive a letter from DHHS in the mail explaining how to activate and use their card.

“As our schools closed, many families across the state worried about where their next meals would come from—and we knew we had to take action,” said NC Department of Health and Human Services Secretary Mandy Cohen, M.D. “The P-EBT program will provide extra help buying groceries for the families of the more than 800,000 children who normally receive free and reduced lunch at school.”