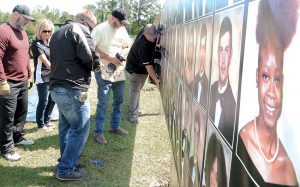 Sign work at South Columbus Thursday morning included, from left, Russell Dove, Michelle Simmons, Adam Thompson, Ronald Carteret, and Bobby Godwin. A series of photos of the banner are at the bottom of this story. (Deuce Niven, TLT)

South Columbus High’s Class of 2020 will clearly view their senior year through a variety of lenses.

Principal Adam Thompson says he hopes they see the value faculty and staff have placed on this class with 20/20 vision.

Despite pandemic that forced students from them classrooms early as they joined legions of students across the country and around the world with an unanticipated distance-learning reality, faculty and staff have been tirelessly working to ensure that education continued.

Planning is still underway for drive-through commencement ceremonies later this month, though it’s certain students won’t be filling the auditorium, and walking across the stage in a crowded auditorium to receive their diplomas and other accolades.

School leaders know there are traditions the Class of 2020 will simply miss.

That knowledge prompted the display erected in front of the school campus Thursday morning, a half-day project that involved Thompson driving to school on a tractor, using the augur to dig holes for the 4×4 posts supporting a big banner saluting the senior class, 66 feet long and four feet wide featuring a photo of nearly every class member.

There were a few class members who did not want their photo made for the school’s yearbook, or for whom photos were not available for other reasons.

Schools were closed before the traditional class photo – seniors seated in the school gym – could be taken. Carlton Hubbard Photography was instrumental in pulling off the project, and “gave us a good deal on the banners,” Thompson said.

Simmons posted a video message from Thompson, photos of the sign and the effort to erect it, to the school’s Facebook page.

“On behalf of the administration, faculty and staff at South Columbus High School, we wanted to present our seniors 2020 a special gift,” Thompson said in the video post. “Go Stallions, congratulations to our senior graduates.” 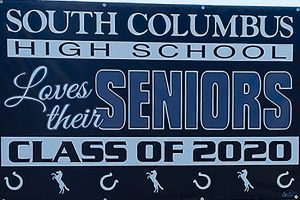