Demographic data from the Columbus County Health Department. Details are below.

COVID-19 infections are up among vulnerable populations in the Tabor Loris Community (TLC) this week, at Tabor Commons Assisted Living and Loris Rehab and Nursing Center.

Meanwhile, an additional death from the coronavirus was confirmed in Columbus County on Tuesday, with eight new cases confirmed, and another two positive cases reported in Horry County.

Coronavirus infections spread rapidly and deeply at Tabor Commons in the past week, claiming five lives.

A total of 38 residents were confirmed with the disease a week ago, 49 on Tuesday, with the number of COVID-19 positive staff members doubling from two to four, DHHS data shows.

That data, and similar numbers from South Carolina’s Department of Health & Environmental Control, is updated Tuesday and Friday afternoon each week.

At Tabor Commons the number of infected residents rose to 44 on Friday, from 38 the previous Tuesday.

There were two deaths confirmed at Tabor Commons by the DHHS data on Friday, five on Tuesday.

Another Columbus County person has died of COVID-19 complications, the 17th since the pandemic began, eight more residents have tested positive for the disease, the Columbus County Health Department reported Tuesday.

“The individual passed away while hospitalized,” a health department news release said. “The individual was a previously identified positive case in Columbus County.

“To protect the families’ privacy, no further information about these individuals will be released. We offer our deepest condolences and sympathies to all of the individuals’ family and friends in this very difficult time.”

With the eight newly confirmed COVID-19 cases 221 Columbus residents have tested positive for the coronavirus.

“Two of the new cases are healthcare workers, two cases are connected to congregate living facilities outside of Columbus County, two cases are close contacts to known positives, one case is work related, and one case is still under investigation,” the health department reported.

County data documented on the state DHHS dashboard sometimes shows later than the information released by the local health department. 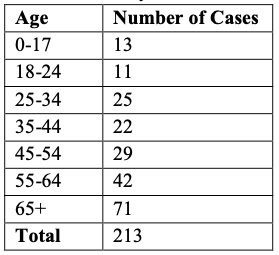 Those 65 and older recorded the most positive tests, 71, followed by the 55-64 age group with 42 people confirmed as infected.

African Americans in Columbus continued to show up in higher numbers of confirmed COVID-19 cases than their percentage of the population might suggest, with 90 confirmed confections, the white population with 112, the county health department reported Tuesday. Six American Indians and four Hispanic or Latino people have also tested COVID-19 positive, the report showed.

NC TOTALS: Statewide there are 15,346 confirmed COVID-19 cases in 99 North Carolina counties Tuesday, up by 301 from Monday, the DHHS reported. There were 577 North Carolina deaths attributed to COVID-19 Tuesday, 22 more than Monday; with 475 current hospitalizations, that number up by 11 from the day before.

Horry case count up by two

With the latest report Horry County has recorded 269 people testing positive for the disease since the pandemic began and 18 deaths.

Zip Code data shows 30 of those cases in the Loris Zip Code, one in the Green Sea area, none of those new on Tuesday.

Statewide there have been 7,927 positive tests returned for COVID-19 in South Carolina, up by 147 from Monday; with 355 related deaths, that number up by nine from Monday.