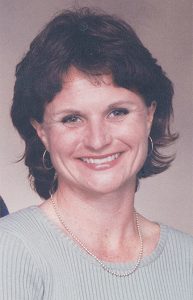 Diana Pace Cartrette of Fort Worth, Texas went to be with our Lord on Tuesday, May 12,. She was 62.

Diana was born in Alexandria, Virginia to Allen and Marjorie Pace and was the youngest of five children. Diana married the love of her life, Tabor City native Jimmy Jack Cartrette, on May 30, 1977 and they were happily married for almost 43 years. Jimmy and Diana had three beautiful children together, Allen age 38, Katie age 36, and Stephen age 30. Stephen and his wife, Kayla Armstrong Cartrette gave Jimmy and Diana their first grandchild, Ryder Hayes Cartrette age 10.

Diana lived for her family and for the Lord. She had a servant’s heart and spread joy and laughter to everyone around her. Diana was a living example of Eph. 4:32. She was a strong, God fearing woman with a heart for Jesus. Diana served selflessly by giving, feeding, welcoming, enduring, suffering without complaint and loving eternally.

She is also survived by loving nieces and nephews, precious cousins, and dear friends.

Diana was preceded in death by her parents, Allen and Marjorie Pace and brothers-in-law Danny Cartrette and Roy Byrd.

A memorial service will be held at a later date when it is safe to gather and celebrate Diana’s life.

A link to an online memorial page can be found here.