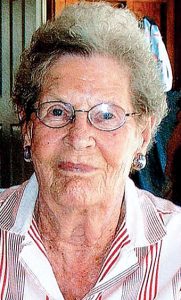 Elsie Cansler Graham of Loris entered into eternal rest on Friday, June 5. She was 87.

She was born on Feb. 28, 1933 in Edgefield to the late Isaac Avery Cansler and the late Myrtle Ann Workman Cansler.

She was married to the late Floyd Elmon Graham. The two made their living farming. After her husband’s death, she continued her produce garden as long as she was able. She always enjoyed seeing and visiting with her customers who came to buy her produce.

She was a member of Loris First Presbyterian Church, but attended Glendale Baptist Church after she and Floyd were married. She always enjoyed singing in the choir and was a blessing to all who knew her.

She is survived by one sister, Sue Prosser and her husband, Jerry of Hanahan; one brother, Carroll Cansler of Albuquerque, New Mexico; and many nieces, nephews, and extended family.

She is also survived by a special niece, Sonja “Kaye” Causey and husband, Donald, and a special nephew, Wallace Todd, all of Loris, who have always taken care of her.

She had two very special people in her life, Randiss and Carlton Hardee who watched after her and made sure her grass was mowed, helped her with her tractor work in her garden, and anything else she might need.

In addition to her husband, Mrs. Graham was predeceased by two brothers, Coy Cansler and Johnny Cansler; and one sister, Barbara C. Hardee.

Family greatly appreciates both your prayers and loving support during this difficult time.