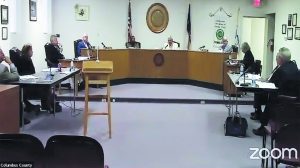 Columbus County Commissioners met for about 50 minutes Monday evening before going into a closed session, but for those listening either on-line or by telephone, the meeting was largely closed all evening.

Because of health and safety social distancing guidelines during the COVID-19 pandemic, commissioners have either met virtually, each member at a separate location with Zoom or similar technology allowing them to gather virtually, with mixed results.

Back in their chambers on June 1, with public access to a Zoom feed accessible on the county’s website, and with a telephone option for those without Internet access, the result was mixed, with some commissioners heard clearly, some poorly.

That seemed worse Monday, with chairman Edwin Russ the most easily understood either online or by telephone. No one else was consistently easily understood, and much of the meeting was simply unintelligible.

At one point, Russ told others that he had received a text about the poor audio quality, and encouraged others to speak into their microphones. That did not seem to make a difference.

Much of the meeting, based on the agenda, was fairly routine. A highlight might have been a public hearing on the proposed county budget for the year that begins July 1, but County Attorney Amanda Prince told commissions that she received no comment by phone or e-mail prior to the meeting, and the public hearing was finished in less than two minutes.

Look for any updates on this story, if they become available, in this week’s Tabor-Loris Tribune in print or online.