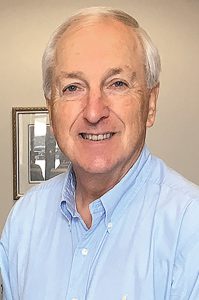 Acting Loris Administrator Dennis Drozdak will leave the office June 30, the legal deadline for the city’s new budget for the year that begins July 1.

That budget will apparently not include pay hikes for city employees, though Mayor Todd Harrelson said city leaders hope to provide pay increases later in the year.

Drozdak, who is also the acting City Clerk Treasurer, offered no comment on his resignation during the semi-virtual Zoom meeting Monday, with all members of council present at City Hall, the public and media kept out because of social distancing regulations due to the COVID-19 pandemic.

It was the budget that offered a clue that Drozdak was leaving. His salary was not included. Mayor Todd Harrelson had praise for Drozdak, who was just hired last fall.

“I felt Drozdak did an amazing job,” Harrelson said. “I prayed for a person like him.”

Harrelson said a “financial advisor/accountant” will be hired to replace Drozdak, with no indication that the administrator’s post will be immediately filled.

Council’s meeting Monday was called to consider the fiscal 2020-2021 budget, which currently does not include pay raises.

“We need to crunch numbers,” Mayor Harrelson said. “City employees spend hours away from their family, working when we are asleep at 3 a.m.

“They also work weekends, for instance Brandon Harrelson and his team of public works worked all weekend, including many other city employees during baseball tournaments at Heniford Field.”

“The guys work really hard,” Brandon Harrelson said. “I am coming to you to ask if there is any way to look out for our employees. They are our backbone.”

The proposed $3.2 million budget plan includes what councilman Carroll Padgett earlier this month called an “over prediction of revenues” and initially did not include $30,000 for a required budget that, if it takes place, will be the first for the city to be completed since 2016.

Pleading for pay hikes, Brandon Harrelson said “Employees shouldn’t pay for the sins of the past.”

Police Chief Buley asked for more revenue for his department, including for salaries.

“We are going back to look and vote for raises in the future,” Mayor Harrelson said. “I want them (employees) to know they are having raises, but not implemented immediately. It should happen. I don’t want employees to think they aren’t getting raises.”

Look for more on this story and related Loris City Council issues in this week’s Tabor-Loris Tribune in print and online.