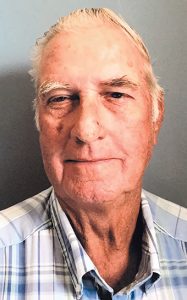 Billy Jack Fowler of Loris died Monday, July 6. He was 79.

Born Jan. 9, 1941 in Loris, he was the son of the late Porter Fair Fowler and Jennie Bell Soles Fowler.

He is survived by one brother, Eugene “Gene” Fowler of Loris; and four sisters, Mearl Dean Fowler of Loris, Geneva Lawson of Tabor City, Lola Sykes of Greensboro, and Patricia Carlisle of Jacksonville, Florida.

In addition to his parents, he was preceded in death by one sister, Lila Rhodes; and five brothers, Curtis Mack Fowler, Timothy Fowler, Danny Fowler, Nicky Gene Fowler, Sr. and Joe Dale Fowler.

Visitation was planned from 7 to 9 p.m. Tuesday, July 7, in Inman Ward Funeral Home.

Due to the COVID-19 pandemic social distancing will be observed and the family asks that all who attend wear a mask.