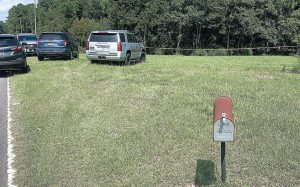 This is the area where a body was recovered near Loris Monday. (HCPD photo)

A murder investigation is underway following the discovery of the body of a Tabor City area man near Loris Monday.

“Information regarding his cause of death will be released after his autopsy Thursday,” Willard said.

Horry County Police Department officers responded to a report of a found body off of Armview Road at about 3 p.m. Monday, and quickly confirmed the report received by Horry County 911, an HCPD news release said.

Armview Road is located northeast of Loris, off of Oak Dale Road, and becomes Oakdale Road in Columbus County at the state line.

Police ask that “anyone with information relevant to the investigation” call 843-915-8477.

Look for updates here as events warrant, and in Wednesdays Tabor-Loris Tribune in print and online.