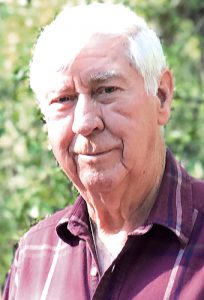 Born Jan. 20, 1936 in Duplin County, he was the son of the late Winston Earl and Bonnie Bell Hill Herring.

He was an incredibly loving husband, father, grandfather, and great grandfather who dedicated his life to God, his family and his church.

He attended Grace Tabernacle church where he served as an elder for many years. He was also an ordained minister in the church. He loved his church and the people in it.

He was married for 66 years to his high school sweetheart and together they had 4 children as well as 13 grandchildren and 13 great grandchildren.

He served in the US Army in his earlier years and then went in the grocery store business for many years until he retired.

He is survived by his wife of 66 years, Bernice Swinson Herring of the home; two daughters, Angela Sycamore and April Guerriero and her husband Matthew, all of Florence; two sons, David Herring and his wife Mary of Fayetteville and Steven Herring and his wife Brenda of Tabor City; three sisters, Mary Hicks of Tuscaloosa, Alabama, Helen Banks of New Bern, and Lou Ellen Carroll of Albertson; one brother, Lawrence Herring of Goldsboro; thirteen grandchildren and thirteen great grandchildren.

In addition to his parents, he was preceded in death by four siblings, Betty, Lucille, James Earl and Boyce.

Due to COVID-19, there will be a private memorial service for the family.

Family requests that in lieu of flowers that memorial contributions may be made to: Grace Christian School, 1375 Tory Hill Rd., Loris, SC 29569.