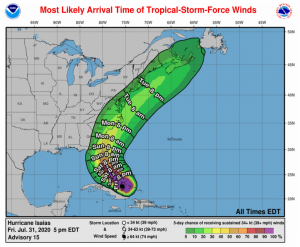 States of Emergency have been declared in the Carolinas, with Horry County government adding their own declaration as Hurricane Isaias is poised to make some kind of impact on the Tabor-Loris Community early next week.

Just how significant that impact will be isn’t yet clear, Isaias currently classified as a Category 1 hurricane could jog to the east or west, with even slight movement either way determining how much wind the region will get.

Forecasts Friday included possibilities of the storm making landfall in Florida, and again later in South Carolina, a possibility that would reduce wind strength. While well offshore would mitigate impacts the National Weather Service said, a near shore pass could give the storm more strength from the warm waters and more impacts.

Horry County Council on Friday declared a localized State of Emergency in anticipation of Isaias, the county’s Emergency Management Department moving a step up to OPCON 2.

That means “the county is now operating in a heightened state of awareness with emergency plans beginning to be implemented,” a news release from county government said. “County officials have begun discussions with South Carolina Emergency Management, coastal communities including local municipalities, and will continue to monitor the situation closely.”

Horry County’s Emergency Operations Center has not been activated, but would be if events warrant.

“County shelters will be very different this hurricane season, if needed, due to social distancing guidelines and guidance from the American Red Cross,” a Columbus County news release late Friday afternoon said.

That distancing will greatly limit the capacity of shelters, currently planned at all three of the county school’s high schools and Edgewood Elementary School in Whiteville.

A shelter in the Guideway/Nakina/Old Dock areas is “TBD” (to be determined,” the news release said. Guideway Elementary has been a shelter for the area previously, but it has been closed as part of a county-wide school consolidation process.

Cots will not be available if shelters open, for at least two days. Residents who find a shelter to be their last resort should visit here.

Those who seek shelters at shelters need to bring sleeping bags, blankets, and pillows. Disaster supplies should also be brought.

Suggestions for a disaster supply kid can be found here.

If shelters open in the county, at least one will be designated a pet co-location facility where residents can evacuate with their cats or dogs. Guidelines for those shelters include: