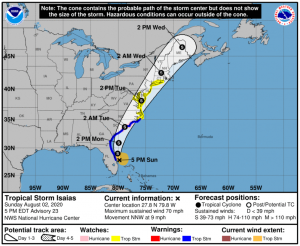 Tropical Storm Isaias, downgraded from hurricane status during the weekend, continues its slow trek towards the Tabor-Loris Community, but is expected to make a rapid departure after its impacts arrive overnight Monday, the National Weather Service reported in its 6 p.m. update Sunday.

Strengthening to hurricane status remains possible, with a hurricane watch in place that includes Horry County. Columbus remains under a tropical storm warning.

Wind impacts including scattered power outages and flooding rain in poor drainage and low-lying flood prone locations is possible, the NWS reported. Most areas will receive from 4 to 6 inches of rain.

Horry County Board of Education has rescheduled its Monday night meeting for Tuesday, and the district has delayed the resumption of athletic training for high school sports from Monday to Wednesday.

Columbus County Board of Education has also rescheduled its Monday meeting for Tuesday, with a 5 p.m. start and public access available online at the www2.columbus.k12.nc.us.