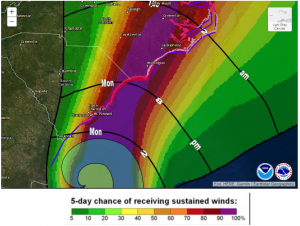 Columbus County government offices closed at 4 p.m., Southeastern Community College shut down all but online classes effective at 3:30 p.m., and a State of Emergency has been declared for the county as Tropical Storm Isaias continues its run towards the region.

Forecasters predict the storm will cross the wind speed threshold of 75 miles per hour and regain hurricane status as it approached Myrtle Beach, potential making landfall in southern Horry before tracking inland on a path through the heart of Horry and Columbus counties, including the Tabor-Loris Community.

Hurricane or tropical storm will make little, if any difference in the storm impact, with the National Weather Service predicting a 40 to 70 percent chance of damaging winds through much of the area.

“Impacts will remain identical,” Horry County Emergency Management Director Randy Webster said during an afternoon news briefing. “We hope it will track to the east.”

An eastern track would keep the area on the western side of the storm, with a lower probability of significant wind and storm damage, Webster said.

Forecasts continue to predict Isaias as an overnight event for the region, the bulk of the storm expected to be north of the Tabor-Loris Community and moving away quickly by daybreak Tuesday.

Horry County public safety agencies will use caution responding to calls once sustained wind speeds reach 40 miles per hour, and will essentially stop when they reach 75 miles per hour, until conditions improve, Webster said.

Horry County 911 Director Renee Hardwick asked residents not to call 9-1-1 unless there is a true emergency, not to hesitate to call in life-or-death situations.

Columbus County officials said to call 9-1-1 in an emergency, defined as “any serious situation where a law enforcement officer, fire fighter, or emergency medical help is needed right away.”

Horry County’s Emergency Operations Center will open at 5 p.m. today, and a help line will be staffed for the duration of the emergency, Webster said. Those who wish to report trees down and similar non-emergency situations are asked to contact the call center at 843-915-5000.

There will be no American Red Cross shelters open in Horry or Columbus counties tonight, that decision made in part over new COVID-19 distancing guidelines. This storm will move through in a matter of hours, and shelter decisions may be revisited Tuesday, if necessary, officials in both counties said.

Tropical Storm Isaias appears headed directly for the Tabor-Loris Community later this evening, its impacts beginning this afternoon with heavy rain and later tropical force storm sustained winds along a wide path east of I95 to Wilmington.

Landfall, the NWS noon update indicates, will come about 8 p.m. in the Myrtle Beach area, with Isaias taking an northeasterly course, its center through the heart of Horry and Columbus counties.

Already Horry County and Columbus County boards of education meetings scheduled for this evening have been pushed forward until Tuesday.

Horry County government offices are also closing at 2 p.m. today, in anticipation of worsening weather conditions, and will delay opening Tuesday until 10 a.m.

A Columbus County Board of Commissioners meeting, scheduled for 6:30 p.m.. today, has not been cancelled. Board chair Edwin Russ said the agenda is light, the board hopes to move through it quickly, allowing its members to get home before winds and heavy rain become too intense.

Southern and coastal sections of Horry County are under a Hurricane Watch, northern Horry and all of Columbus under a Tropical Storm Warning, the NWs reported. A Flash Flood Watch is in effect for a broad region that includes all of Columbus and Horry counties.

Potential impacts for the Tabor-Loris Community include wind with some damage to roofing and weak structures, downed trees and power outages, and flooding, particularly in low lying areas with a history of flooding.

“The chance of damaging, strong tropical storm winds is 40-70% for much of the area,” a NWS slide said.