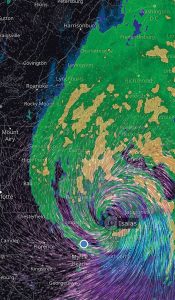 Impressive in this MyRadar app screenshot, Hurricane Isaias was rapidly moving away from the Tabor-Loris Community by 12:30 a.m. Tuesday.

Hurricane, then Tropical Storm, then Hurricane Isaias during much of Monday seemed to have the Tabor-Loris Community in its crosshairs.

Its course generally following National Weather Service forecasts, and staying well within the “cone of uncertainty,” was just fickle enough to largely spare the Tabor-Loris Community, apparently inflicting the most damage on Ocean Isle Beach, where the Category 1 Hurricane blew ashore with 85 mile per hour winds and causing home and condo fires that required mutual aid responses from Brunswick, Horry and Columbus county fire departments.

That does not mean the department wasn’t busy

“When the pager goes off every hour on the hour you don’t get much sleep,” Hardee said.

Hardee said the calls were “mostly medical,” with one dispatched as a structure fire that turned out to be a dryer fire, not at all related to the storm.

“We had some trees down, just small stuff,” Fowler said. “The biggest thing was the power substation out on Seal Street blew. We sat at the station watching it arc for 20 or so minutes before we got dispatched to it. There wasn’t anything we could do with it.”

About 1,000 Tabor City customers were without power for much of the night, the utilities’ online outage map showed. Power was restored to most after daylight, the map showing fewer than a dozen customers still without power just before 9 a.m.

Nearly 300 remained without power in the Williams Township, Beaverdam area at that time, hundreds more in Whiteville, Brunswick, and Lake Waccamaw, fewer than two-dozen in the Fair Bluff and Cerro Gordo areas.

In Horry County just a handful of Santee Cooper customers, all along the immediate coast, were without power Tuesday morning while Horry Electric Cooperative was reporting nine outages impacting 71 customers, none in the Loris and Green Sea areas.

“Tabor City fared very well,” Maj. Russell Conway of the Tabor City Police Department said. “We had a bunch of alarm calls, of course, but everything was fine.

“We were fine,” said Hardee, the Loris Fire Chief. “We didn’t get quite as much rain as I thought we would. I went and checked the areas that usually flood, and there were no problems.”

“We actually fared really well,” Loris Interim City Administrator Brandon Harrelson said. “I was impressed with how the storm water system functioned. We got around three inches of rain. Thankfully, it wasn’t that bad.”

Look for a wrap-up on the storm in Wednesday’s Tabor-Loris Tribune in print and online.