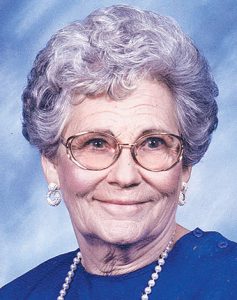 Lillie Pearl Prince of Loris, wife of the late Ernest Ivey Prince, passed away Monday, Aug. 17, at her residence. She was 97.

Born Aug. 21, 1922 in Brunswick County, she was the daughter of George L. Russ and Susan Jane McLamb Russ.

She was a member of Loris First Baptist Church.

Visitation was planned for the hour preceding the service in the church fellowship hall.