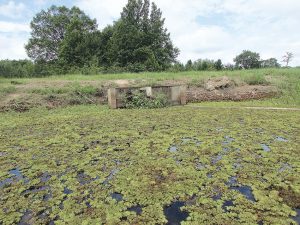 Giant Salvinia, described as “a very aggressive noxious aquatic weed,” has been found in two ponds in the Gapway area of Columbus County, west of Tabor City, county leaders are learning.

Emens said an infestation at Richardson Pond in the Gapway area off of Sidney Cherry Grove Road.

“After my initial site inspection I discovered that Buffkin Pond is also heavily infested,” Emens said.

Richardson and Buffkin ponds are relatively near each other, separated by Gapway Church Road.

“Cursory survey work of the area” indicates the infestation may be limited to the two ponds “and areas downstream,” Emens wrote. He described the plant as “regulated, therefor, illegal to propagate, sell/trade, transport, etc.  NCDA&CS is the state agency that holds regulatory authority.”

Giant Salvinia floats, and “due to the heavy infestation in Richardson Pond a significant number of plants have been pushed through the water-level control structure and have been carried downstream,” Emens wrote.

North Carolina has limited experience with Giant Salvinia, a plant Dockery said is indigenous to South America. Discovered in North Carolina some two decades, it was “removed from several sites and since 2008 we considered NC to have no known infestations,” Emens wrote.

It was listed by the US Department of Agriculture as a “noxious weed” in 1983, Dockery said, and found in a small pond in South Carolina in 1995.

Leaves of the plant are small, Dockery said, similar in size and shape to fingernails.

“Leaves of young plants tend to lie flat upon the water,” Dockery said. “The largest leaves may grow to about two inches. Giant Salvinia can grow very rapidly. Under favorable conditions, infestations will double biomass in 4 to 10 days. Imagine if the tree in your yard doubled its size every week.”

When mature, the plants “create a dense floating mat,” Dockery said. “In places where Salvinia has not been controlled, mats have grown to be two feet deep.”

That, Dockery said, chokes other vegetation, displaces fish, and can impact reptiles, amphibians even wading birds and other waterfowl.

While it’s not clear how the Giant Salvinia made its way into local ponds, “boats and other personal watercraft” also carry the weed from one body of water to another. Just a small amount can multiply rapidly, Dockery said.

Dockery said planning has begun to deal with the issue.