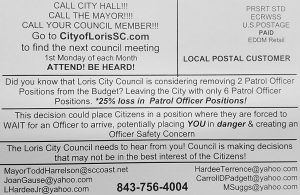 Loris residents have been called to speak out and speak up for the Loris Police Department on a budget proposal to cut two officers from the force.

Mailed and unsigned post cards delivered to city residents Friday urged residents to attend City County meetings, starting with this Monday’s scheduled first-Monday gathering, to “BE HEARD” on a proposal not to replace two officers who departed recently for other job opportunities.

Stark all capital letters reading “DEFUND THE LORIS POLICE DEPARTMENT???” were on one side of what appeared to be a professionally produced card, with the other side reading: “Call City Hall!!! Call your council member!!! Go to CityofLorisSC.com to find the next council meeting 1st Monday of each month ATTEND! BE HEARD!”

Lt. Larry Williams of the Loris Police Department said the card has some facts right, others wrong. While council is wrestling with funding issues related to the ongoing COVID-19 pandemic, and is currently not moving to replace officers Tyler Wescott and Naim Vaughn; Williams said those vacancies leave the 12-member force down to 10 officers now, almost twice the 6 referenced on the card.

That total, however, includes the chief, Lieutenant, a detective, a school resource officer. With two patrol supervisors and six patrol officers, there are eight assigned to patrol, but only half currently on the job. That includes two vacancies from resignations, and two officers currently in academy training.

City Council member Carroll Padgett said any discussion on funding police positions will be because city revenue issues, and not related to any national “Defund Police” movements.

That card said cutting those positions “could place citizens in a position where they are forced to WAIT for an officer to arrive, potentially placing YOU in danger & creating an officer safety concern.”

Mayor Todd Harrelson said he was looking into the source of the card, and hopes to provide more detailed information soon. While he said he does not know who was responsible for the anonymous cards, their motive seems clear.

“It was someone who was trying to start trouble,” Harrelson said.

Clearly a call to contact elected leaders in support of the police department, the card includes the telephone number for City Hall, and individual e-mail addresses for five of the city’s six sitting council members. Missing was council member Jan Vescovi, who Friday said she was not aware of the card or who sent it.

“I hadn’t received any information about postcard,” Vescovi said. “I am obviously unaware of this being sent out or why my name was not included.

“Obviously, I am not in favor of defunding the police department. Citizens’ safety is of utmost importance.”

Padgett said he learned of the post card in an e-mail from the mayor.

“I don’t know where they are coming from,” Padgett said. “I spoke to Councilman Michael Suggs and he stated he had received one.

“At this time, we have no plans to replace officers. We have responsibility to be in good financial standing.

“I was Associate Probate Judge for two years, which required law enforcement. Everything I’ve done in my life required them, so they are very important. I am against defunding LPD.”

Police Chief Gary Buley said he received a card Friday, but that its source was not from withing the Loris Police Department.

“I am not sure who did this,” Buley said. “I do know it was not an officer or myself and I have no reason to not believe them. They called me as soon as they saw them.

“If a citizen chooses to do that, I can’t stop them. That is their right.”

(Updated to correct and clarify current staffing at the Loris Police Department.)