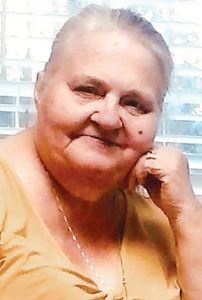 Shirley Ann Buffkin of Tabor City died Sunday, Jan. 17, in her home. She was 76.

Born Aug. 27, 1944 in the Sandy Plain Community, she was the daughter of the late Henry Buck McDowell and Dorothy Hewett McDowell.

She was preceded in death by her husband, Rev. Jerry Buffkin; two brothers, Harlee McDowell and James Verlon McDowell; a sister, Pearlease McDowell; and a granddaughter, Summer Dawn Cartrette.

She was a member of Mt. Beulah Original Free Will Baptist Church, where she played the piano and loved to sing.

Visitation was planned from 6 to 8 p.m. Wednesday, Jan. 20, in Inman Ward Funeral Home.