More than 1,000 Pfizer COVID-19 vaccines have been given in Tabor City since 9 a.m. Saturday, but 60 were left shortly before 5 p.m. and there was no line.

StarMed staff and volunteers don’t want to take any of the vaccines back, and are encouraging anyone who wants one to come to West 4th Street, at the Tabor City Court Building, where the event has been underway all day.

StarMed held a similar event in Whiteville Thursday, and extended those hours to make sure all of the vaccine was used.

“We were supposed to wrap-up at 6, but we stayed until 9 to make sure all the vaccines were given,” said City of Whiteville Emergency Management Director Hal Lowder.

COVID-19 vaccination efforts at Southeastern Community College and at the Court Building in Tabor City brought more than a thousand, perhaps twice that many for those injections Saturday.

Traffic for the Johnson & Johnson vaccines at SCC was heavy, reportedly lined up from the east entrance to the college to Union Valley Road, and from the west entrance a good distance towards Chadbourn, well before the scheduled 9 a.m. start.

Johnson & Johnson vaccines require only one injection, with no follow-up required.

Vaccinations were given at SCC soon after 9, and the process appeared to run smoothly, and quickly. Those who arrived earliest were leaving not long after 9:30 p.m., some who arrived about 8 a.m. were out by about 10 a.m.

About 300 staff members and volunteers were expected for the event, which was scheduled to end at 4 p.m. A total of 1,000 Johnson & Johnson vaccines were available at SCC, that supply exhausted shortly after 1 p.m. 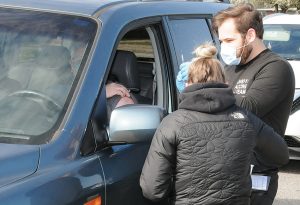 A separate vaccination effort in Tabor City, operated by Charlotte based StarMed under contract with the state’s Department of Health and Human Services, had more than 1,000 Pfizer vaccines available, with the demand apparently strong as of 1 p.m., volunteer Lamont Grate, who is Tabor City’s Mayor pro tem, said.

Unlike the J&J vaccines, a second doze the Pfizer vaccine is required 21 days after the first.

Advertised as an appointment-only event, there were plenty of slots still available Saturday morning and drive-ups were being accepted, a nurse involved in the effort said.

Scheduled to run through 6 p.m., the StarMed vaccination event in Tabor City will take those without appointments as long as supplies last.

Look for more on this in the next Tabor-Loris Tribune in print and online.