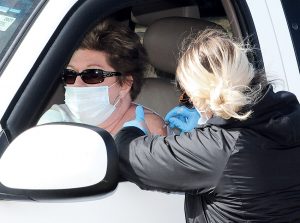 A COVID-19 vaccination is given in Tabor City on Saturday, part of a statewide effort that has allowed for an easing of pandemic restrictions in North Carolina beginning this Friday. (Deuce Niven, TLT)

Across the state lane in Horry County there is conflicting state data on COVID’s toll on Horry County lives while new cases counts appear steady.

An easing of COVID-19 restrictions across North Carolina, effective Friday afternoon as announced by Gov. Roy Cooper on Tuesday, will allow more people to attend sporting and other public events, especially those outdoors.

Gov. Cooper and NC Department of Health and Human Services Director Dr. Mandy Cohen said the decision to ease pandemic restrictions in Executive Order No. 204 came as the state’s COVID trends continue to improve and vaccine distribution is increasing.

Already nearly 32 percent of the state’s adult population, those 18 and older, have received at least one dose of Vaccine, and almost 19 percent are fully vaccinated, the governor and Dr. Cohen said.

“Our fast and fair vaccine distribution and our sustained progress with the COVID-19 metrics tell us we can move forward with easing restrictions if we do it safely,” Gov. Cooper said.

“We are in a promising place,” Dr. Cohen said. “With North Carolina’s COVID-19 key metrics improving and vaccinations increasing, we can responsibly use our dimmer switch approach to easing restrictions guided by science and data.”

All businesses are ordered to continue to maintain the 6 feet of distance requirement between patrons and implement other safety protocols as they expand capacity, the order said.

Mass gathering limits are also increased in the order, indoors limits rising from 25 to 50, outdoors from 50 to 100.

Gov. Cooper said that while restrictions on sporting event and other activities have eased, mask and social distancing mandates remain in place, and could impact just how many people could be inside any specific venue.

Restrictions on late-night sales and service of alcoholic beverages in bars, restaurants and other establishments are also lifted in the order.

To view the order and its specific details, look here.

Two weeks with no virus fatalities in CC

Another encouraging trend for Columbus County, there no newly confirmed COVID-19 associated deaths reported during the week ending Tuesday, the second consecutive week for that milestone while the number of newly confirmed cases appeared stable, data from the NC Department of Health and Human Services shows.

There were 63 newly confirmed coronavirus cases in the county for the week, just seven more than the 56 reported for the previous seven days, the DHHS data showed.

An unusually high number of newly confirmed cases from the Fair Bluff area, 15, matched that of Whiteville, and topped the other three areas with mostly larger populations.

There were three newly confirmed cases in the Cerro Gordo and Riegelwood Zip Codes, one each in Clarendon and Nakina, while the rest of the areas recorded none.

As of Tuesday, DHHS data showed Columbus County with 6,073 confirmed cases and 147 associated deaths. Tabor City has recorded 1,467 cases with 34 deaths, Whiteville 1,930 cases and 51 deaths. No other Columbus Zip Codes have come close to 1,000 cases.

Schools: Four students in the Columbus County Schools have tested positive for COVID-19 in the past week, district spokesman Kelly Jones said Thursday.

They included three students at Cerro Gordo Elementary, one at West Columbus High, none requiring quarantines.

Statewide 1,956 people were hospitalized due to the coronavirus Tuesday.

While DHEC’s county data total showed an increase of eight deaths from the previous week, its detailed report showing the age rate and dates of death indicated as many as ten Horry residents had succumbed to the coronavirus as reported during the week ending Tuesday.

Of those ten, six were reported as elderly individual, four as middle-aged, dates of death between March 5 and 16.

A total of 286 Horry residents were confirmed as testing positive for COVID-19 during the week ending Tuesday, that just two fewer than the 288 reported the previous week. Fifteen of those newly confirmed cases were from the Loris Zip Code, four from Green Sea.

Pandemic totals for Horry include 430 deaths and 27,898 confirmed cases for the county, including 1,798 cases for the Loris Zip Code, 235 from Green Sea.

Statewide 542 people were hospitalized due to the coronavirus Tuesday.