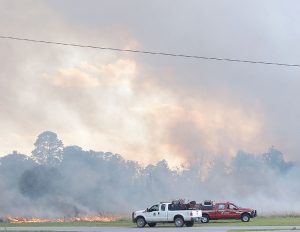 Fueled by higher than typical winds that are expected to continue today, a brush and woods fire in the Goretown area east of Loris spread quickly Wednesday, claiming at least two structures and forcing the evacuation of about a half-dozen homes along Flag Patch road.

Residents forced to evacuate were allowed to return home during the night, as SC Forestry Commission and Horry County Fire/Rescue crews continued to monitor the fire and knock down hot spots.

Sunhouse Petroleum owners Navin Patel and his son Chris Patel watched helplessly as the ABC Store attached to their convenience store burned, and thankful the loss was not worse.

“We are very thankful for the fire departments who came out to save our store,” Navin Patel said. “Although we lost our ABC Store, we are grateful they saved the store.” 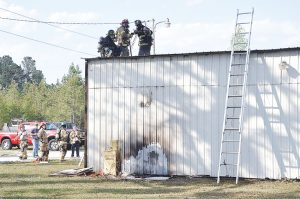 Forecasts of high winds proved accurate, prompting a burn ban in Horry County that began Wednesday morning, and fanning the flames that spread quickly following the 4:30 p.m. alarm centered initially on Raven Drive, just behind the Sunhouse store off of Hwy 9 business about two miles east of Loris.

HCFR spokesman Tony Causey said efforts were quickly focused on bringing the out-of-control fire under control, and that there will be an investigation to determine what, and who was responsible.

From Raven Drive fire moved quickly, crossing Hwy 9 business and spreading along Flag Patch Road, where evacuations were ordered, scorching acres of brush and woodlands and damaging at least one structure.

“All departments worked well together,” Loris Fire Chief Jerry Hardee said. “There was a lot of potential damage with this fire but communication with other departments on the scene worked well.”

Technology aided in the firefighting effort.

“Back in the day, we had to rely on hand signals,” Hardee said. “Now, Horry County has drones that were used to detect the exact location of the fire throughout the area. It’s so advanced. We were a step ahead of the fire.”

Myrtle Beach and North Myrtle Beach fire departments were on standby by answer calls from the HCFR stations committed to Goretown.