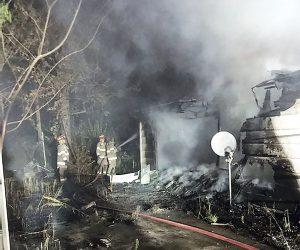 “We got them both out,” Fowler said. “The first one was gutted, the other burned the outside, we got it knocked down pretty quick.

“Both were in bad shape, abandoned. There was no power on either one.”

Owners of the houses live elsewhere, Fowler said. It appeared that one or both were targets of the town’s Code Enforcement efforts that require property owners to maintain them within health and safety guidelines.

An investigation will be conducted by the Columbus County Fire Marshal’s Office, Fowler said.

Look for updates here as events warrant, and in the next Tabor-Loris Tribune in print and online.