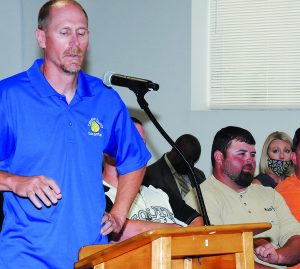 Shaken by gunfire at the Nolan Avenue park Thursday as children were getting set for youth softball play, a parent and league leader pleaded with Columbus County Commissioners to establish a sports complex in a safer area.

Commissioners, who listened empathetically, responded quickly, agreeing to appoint a committee to explore options to develop such a facility.

Southeastern Community College President Dr. Christopher English said facilities there could be made available for youth athletic play, and that the college has land that could be suitable for a new sports complex.

Sheriff Jody Greene said his office would provide deputies for all youth league games in the county.

It was clear that Thursday’s violence at the Nolan Avenue Park in Whiteville struck a nerve.

‘I was thinking about my girls’

Coach Steven Beck, who coaches a Dixie Darlings team, said the 8-year-olds were about to play a game when he heard a familiar sound, but wasn’t sure what it was for a moment.

“I tell my kids to hit the ground. They are panicking. I’ve never seen that look on their faces.”

Beck said the sound of gunfire appeared to be approaching, as he and other adults moved the children towards the woods.

As children were moved to Beck’s truck, he said police began to arrive.

In the moment of calm, Beck said the reality of what had happened “hit me.

“The kids are all panicking. Nobody should witness that. Especially an 8-year-old at a sports complex. The more I sat thinking about what could have happened to the children out there, ya’ll, it hit me, bad.”

Beck described a 5-year-old at the park who said “she didn’t know bad man existed. The next night, they went to a race at Lake View. A car backfired. What do you think she thought it was.”

Shane Hardee, who is involved in youth sports in various ways, and serves as President of South Columbus Softball, said Beck called him during the gunfire.

“Hearing it on speakerphone, it was traumatic,” Hardee said.

While the Nolan Avenue park has a history that includes violence and drug dealing, Hardee said those issues appeared to have calmed after the league suspended play there several years ago.

What Hardee said he did not know was that the park had seen problems in recent months, including a possible murder. There will be no youth softball at the park again, he said.

“My first goal is to try to find a safe place to play sports,” Hardee said.

Youth sports have been hit hard by COVID-19, Hardee said, and the league this year is much smaller than in the past. Still, a central county site for some of the games is necessary, and with Nolan Park ruled out, the league has reached an agreement with the Whiteville City Schools to use high school fields for the remainder of the regular season, and perhaps into post-season action.

“We need a place here, central Columbus,” Hardee said. “They need a place this county owns that’s in a safe area where we can control what’s around it.”

Commissioner Charles McDowell’s motion to create a committee was quickly approved. That committee is to include County Manager Eddie Madden who has experience in the area from his time as Elizabethtown City Manager, at least one commissioner, representatives from SCC, the Columbus County and Whiteville City school systems, and representatives from each of the county’s districts.

Hardee, who volunteered to serve, said a sports complex would not only provide a safer place for youth athletics, but it could provide an economic boost to the county.

“I ask you to consider it,” Hardee said. “I don’t have all the answers. I’m planting a seed tonight.

McDowell warned that it will take years for a sports complex, if approved, to be built, and encouraged efforts to address safety concerns immediately.