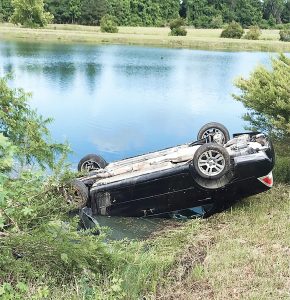 A woman was uninjured after her car overturned into the edge of a pond at Daddy Joe’s Campground on Richard Wright Road near Tabor City Wednesday morning, first responders said.

Bonnie Hedwin of Tabor City was headed towards Tabor City on the two-lane highway when her car appeared to drift off to the right, the driver overcorrecting to the left, crashing through two fences before the car overturned and came to rest at the edge of the pond, Tabor City Fire Chief Jeff Fowler said.

“She had crawled out of the car by the time we got there,” Fowler said.