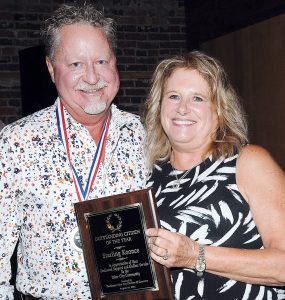 Sterling Koonce expressed real surprise minutes after The Tabor Medal was placed around his neck as the 2021 Diamond Anniversary banquet of the Greater Tabor City Chamber of Commerce Tuesday.

Koonce, owner of Medicine Mart Health Care, wasn’t the only honoree of the evening. Curtis “Tiger” Lovette received the Chamber’s Volunteer of the Year award, and Judy Powell was recognized for a Service Award, but was not present to receive it.

Citizen of the Year

Koonce “is the first to asak what he can do,” Chamber President Marylou Molina said in presenting the award.

Born in Tabor City, that’s where Koonce spent his earliest year, before family circumstances prompted a move to Chadbourn, graduating from West Columbus High School, earning his pharmacy degree from the University of North Carolina at Chapel Hill. 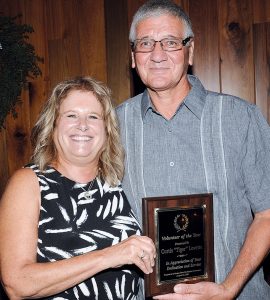 Lovette is known and beloved as “Tiger Tater,” a mascot of the North Carolina Yam Festival at Tabor City, and is a volunteer who does not wait to be asked, Molina said.

“He shows up and wants to know what he can do,” Molina said.

Retired from the United States Marine Corp, Lovette served from 1980 to 1999. His devotion to service remains, though his uniform these days spells Y-A-M-S.

Look for more on this story in this today’s Tabor-Loris Tribune in print and online.