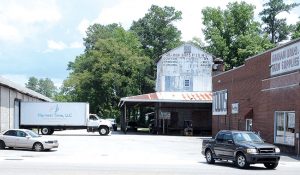 Editor’s note: Tabor-Loris Tribune stands by its reporting in the July 21 story criticized during Tuesday’s Loris City Council meeting. Charlie Todd was contacted prior to publication of that story, and was quoted in it. Neither Todd nor anyone else has contacted this newspaper about the story in the seven weeks since it was published.

Just shy of seven weeks after this newspaper published a story on Loris Mayor Todd Harrelson’s issuing a quit claim deed for a 30-foot alleyway adjacent to a local business, its owner was present at Tuesday’s City Council meeting asking for an apology from Tabor-Loris Tribune and council.

Todd’s Auto Parts owner Charlie Todd told council the alley, “still left on the map with no owner,” appeared unclaimed, and that he contacted the former owner of the other adjacent building, a real estate attorney, and the mayor.

Todd said there were problems in the alley with the current owner of the other adjacent property, NMB Wholesale, “using this alley as a scrapyard with metal containers partially blocking the alley and creating unsafe driving conditions.”

Real estate attorney Kemp Floyd, Todd said, advised getting a quit claim deed, but that “he didn’t know how legally binding it would be, but it would lay a foundation for ownership.”

Both Harrelson and Harvey Graham III, the previous owner of the adjacent building, signed a quit claim deed, Todd said.

“This is why I am here tonight, to let you know that even though the local newspaper is trying to scandalize this into some kind of shady, backroom, greedy land grab between friends, I want you to know this couldn’t be farther from the truth,” Todd said.

Todd said he contacted Harrelson in good faith, and wanted to make sure the alley remained open for public use.

“I can assure you the mayor only had what he thought was the best interest of the city and its citizens when he did this, and has received nothing but grief because of his trust,” Todd said.

“First let it be known I don’t want the alley. Why would I want to take over, unnecessarily, a property I would have to assume liability, maintenance and taxes. I would love for city to take over the alley, so I’m sorry, there goes your scandalous story of greedy impropriety.

“I feel a public apology is in order from the council and the Tabor-Loris Tribune to the mayor for this unfortunate misunderstanding and the way this issue was handled by an attack on his character for what, procedural issues or political gains.”

In the April 21 story, headlined “Mayor signed deed giving alleyway to a merchant, Loris council did not know,” focused on the fact that Harrelson signed the quit claim deed as the city’s mayor, though most council members were sure they were never told, and not one member said they were familiar with the action taken in the name of city government.

“This is unprecedented as far as I know,” Carroll Padgett, one of two attorneys sitting on council said in the story. “Any discussion like this has always been done by council. It’s public property, the public has the right to know about it. It has to be opened up for bids.”

Harrelson, in the story, confirmed that he had not informed council.