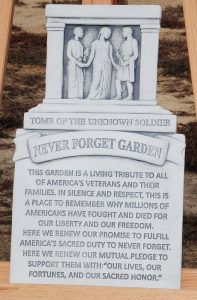 Some three dozen people gathered at the Veterans Memorial Park of America, between Tabor City and Whiteville, for a Veterans Day observance last week. District Court Judge C. Ashley Gore (center, above) was among the speakers, and was watched by (from left) Bill Thompson who sang The National Anthem, park board members Rob Williams and Angela Norris, and park princess Lacee Rogers. Others who spoke included Clerk of Court Jessie Hill, and park board member W.H. Morris. A monument for the park’s Never Forget Garden was dedicated, and tribute was paid to local first responders. Joe Hahn played Taps to close the program. (Deuce Niven, TLT)